I've posted before regarding the main reasons why I love the modules of the 1E era, so I won't go into that again in any real detail.  A few years ago I became aware that Dungeon Magazine had run an article in which they had listed their 'Top 30 Dungeons & Dragons Module", and naturally I sought it out.

What a waste of time.  It was little more than a predictable exercise in industry back slapping.  It was dominated by the lazy Supermodules of the mid 80s, in all their 'disjointed, rehashed with recycled artwork that bore little resemblance to the adventures, poorly edited, and packed with badly written filler' glory.  Certainly the source material for these Supermodules was often classic and thoroughly inspirational, but the reissues themselves, well, they were just cash grabs.  The poll also focussed heavily on more famous modules, ignoring some of the lesser known gems, and there was clearly an effort to squeeze in something from each era of D&D - whether or not these were really any good!

The article was crap.  And from time to time I'd google it and reread it, just to remind myself of how crap it was.

So, for some reason unknown even to myself, many years later, I decided to take it upon myself to do a better job.  I considered how and where I would achieve this for all of about 5 minutes, and then simply plunged in... and here it is....

ROUND 1
95 modules were listed in chronological order
They were then divided into 'eras', with a division line drawn every 14 modules
1 module from each era was then randomly placed into each qualifying group, creating 14 groups of 6 or 7 modules each
Members of the 1st Edition Advanced Dungeons and Dragons group on Facebook were then asked to assign votes to each module (6 votes per person, maximum 3 to each module)
The top 3 modules in each group then advanced to round 2
*Note some 4th place finishers received a higher vote % than 3rd place modules in other groups (eg I12 getting a higher % than N4, but position in the group was what mattered for qualification),

ROUND 2
42 qualifying modules were seeded according to % of available votes received in Round 1
Modules were then put into 7 qualifying groups of 6 based on that seeding
Members of the Facebook group then had to assign a ranking to their top 5 in each group
Top 2 in each group advanced to Round 3, along with the 2 best performing 3rd place finishers

ROUND 3 ONWARDS
These are straight knockout rounds by means of a poll, modules going head to head.
Matchups were determined based on performance in Round 2, #1 vs #16, #2 vs #15, and so on. 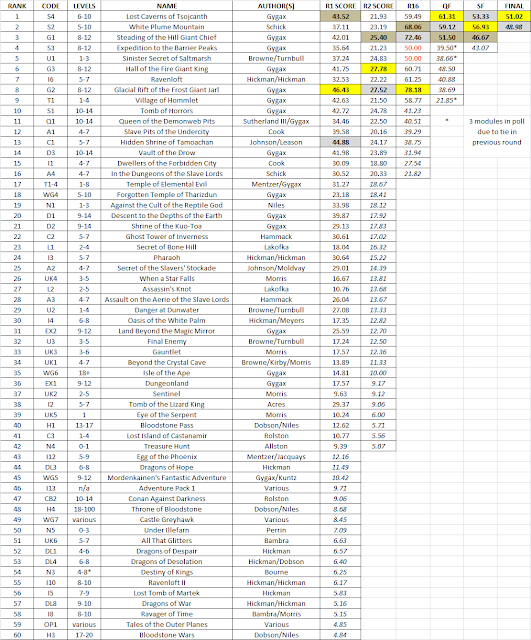 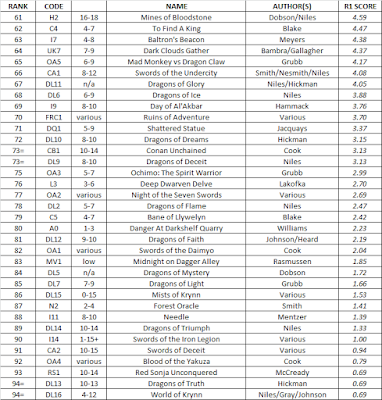 Making 5E work for me…